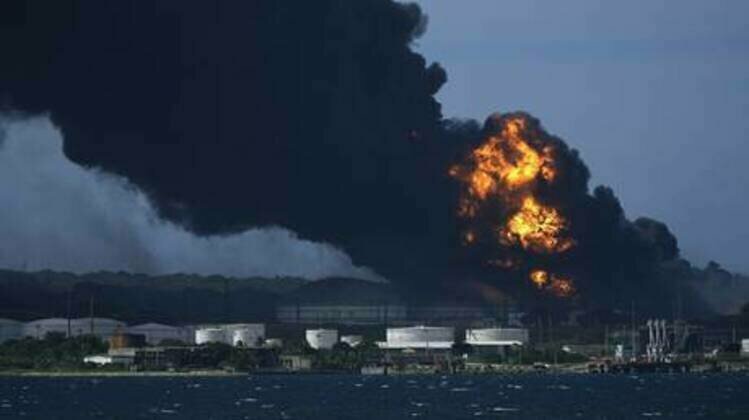 The Cuban government has pleaded for help from "friendly countries" as firefighters are struggling to contain a blaze, raging at a major oil storage facility in the city of Matanzas for a second day, following a thunderstorm on Friday night.

Only one person was officially confirmed dead, but 17 firefighters were listed as unaccounted for on Saturday, following a powerful explosion at the Matanzas Supertanker Base. At least 121 people were injured, five of them in critical condition. Hundreds of civilians were forced to evacuate from the area.

The blaze was initially sparked by a lightning strike that hit one of the facility's eight massive fuel tanks on Friday. On Saturday, the fire spread to a second tank, despite military helicopters constantly dropping sea water and firefighters pouring water on the remaining tanks to keep them cool.

Struggling to contain the blaze on its own, the government in Havana requested "help and advice from friendly countries with experience in fuel," according to President Miguel Diaz-Canel's office.

"We express deep gratitude to the governments of Mexico, Venezuela, Russia, Chile... which have promptly offered material aid in the face of this complex situation," Diaz-Canel tweeted on Saturday. The Cuban leader also acknowledged an "offer of technical advice from the US," saying Havana "appreciates" the proposal.

The first flights with aid from Venezuela and Mexico were expected to arrive in Matanzas, a city of about 140,000 some 90 kilometers east of Havana, on Saturday night, according to local media.