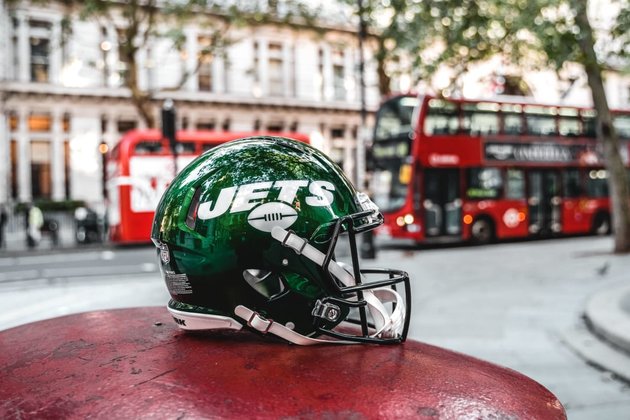 Jets Footprint Expanding in the UK Through NFL IHMA Initiative

The global engagement aspirations of the NFL have been expanding for some time now. From the first game played in the United Kingdom in modern history in October 2007 to others being staged in Mexico and Germany, the power of taking the League beyond its borders has never been stronger, especially amongst its teams. For the Jets, the global and cosmopolitan nature of New York - as a destination and business hub - has always had natural appeal to fans from around the world, and that appeal has grown exponentially each time the team has played games abroad (in 2015 against the Dolphins at Wembley Stadium and in 2021 against the Falcons at Tottenham).

However, the focus on building a consistent presence and fan base for the Jets was somewhat limited by the restrictions placed on clubs by the League. Through data collection and substantial anecdotal evidence, the team knew that fans abroad were engaged, but the contact and cultivation to grow that fan base had its limits that stopped at the shores of the Atlantic.

All that changed for the better earlier this year when the NFL began their International Home Marketing Area (IHMA) initiative, granting NFL clubs access to international territories for marketing, fan engagement, and commercialization. This is all part of an important, long-term, strategic effort to enable clubs to build their global brands while driving NFL fan growth internationally.

The Jets were awarded marketing rights for the United Kingdom and with that license came new opportunity, much of which will begin to play out this summer and into the fall, as the 2022 season takes shape.

"We would receive images and notes from fans who were either living abroad or had experienced a Jets game day when they were in the area visiting, but our ability to connect with them in a meaningful way was limited," said Diana Berkovits, Jets Manager of Strategy. "With the expansion of social media, we saw even more robust and passionate fans create their own game day experiences, or follow, engage, and comment on our posts, with more and more regularity. Now we have the chance to amplify that fandom, in a way that is unique and authentic to a growing base of fans all year long."

In the last year, the Jets launched a UK-specific Twitter feed, @NYJetsinUK, and Instagram account, @newyorkjetsinuk, to harness and augment the power of social sharing directly with a community of UK fans who share the experience of being a Jets fan abroad. Other efforts to engage directly with UK fans included a contest in partnership with Sky Sports, the NFL broadcast rights holder in the UK, that launched around the NFL Draft earlier this year. The VIP sweepstakes for UK Jets fans to win a trip to the 2022 home opener drew four to five times what a similar sweepstakes would draw in the US market in terms of fan engagement, which piqued the interest of team officials, and showed that the path forward to UK growth could be quite robust.

"We were really surprised by the interest level of the contest run through Sky Sports," added Berkovits. "While we knew of the anecdotal interest, the proof is really in the numbers, and the numbers were stunning."

The next step in the Jets fans' UK fan engagement came over the weekend, with the launch of a very robust UK Jets fan-specific Digital Hub, nyjetsinuk.com, filled with expansive and targeted content including contests and promotions, on demand video, and player content. The content will be in addition to the stats, videos, and in-depth team coverage that every fan would expect year-round, making the new portal the virtual destination for anyone in the UK to engage with the team and other local fans.

"Our goal with the portal is not to just repurpose what fans are seeing elsewhere, it is to create original content after listening to our growing fan base that is authentic and specific to their interests," added Eric Gelfand, Jets SVP Communications and Content. "This experience needs to be fun and unique for our fans, many of whom may be getting a deep dive into the team and the NFL for the first time. We want to provide a quality and engaging experience that will not only bring them back for more, but will make them fanatics of our team, our players, and our experience for decades to come, with the grand payoff of seeing the team in person, either at MetLife Stadium or when we next play abroad. We want to create new fans for life in a market we plan to continue to grow in."

Just like our efforts to grow the fanbase in the UK is a full organization effort, the creation of this new digital hub was a multi-department collaboration with key support from the brand marketing team led by Vice President of Marketing, Tim Kemp and Director of Marketing, Jessica Blank as well as Director of Digital Operations, Tony Mancuso. And while the digital presence will be strong, the team will also be building out programs and opportunities on the ground in the UK, similar to the Draft events with Jets legend and UK Alumni Ambassador, Nick Mangold - the first ever UK Draft viewing party, youth flag football coaching, announcing the team's 4th round pick live from London, and unique content filmed across the region. Additionally, the Jets will look to expand their youth flag football programs and develop as well as license Jets-specific broadcast content for weekly television shows and streaming content.

The Jets will also look to expand their sports marketing reach by working even more closely with Premier League clubs whose interest in cultivating fans in the New York area may mirror what the Jets are doing in the UK.

"Be it with European football or American football, fandom is universal, and the allegiances to clubs go far beyond borders now," Berkovits added. "If we can help open a pathway to fan engagement with select English Premier League clubs here in the NYC area, while we get an increased understanding of sport fans in the UK through their engagement, it sets up a win for all, and we all grow together."

Growth for fans beyond traditional borders, utilizing unique fan engagement methods, is what the Jets UK partnership will be all about. The potential to grow the fan base in the UK is limitless.