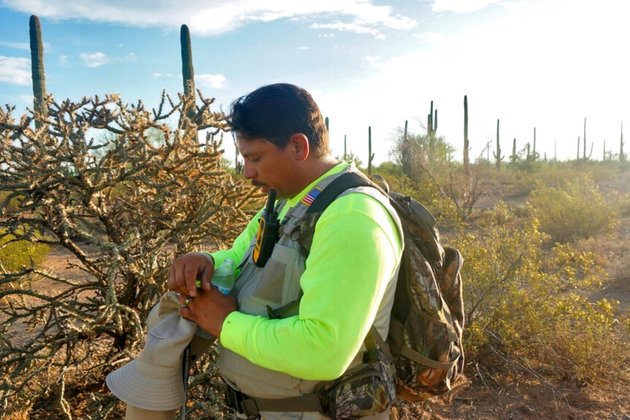 IRONWOOD FOREST NATIONAL MONUMENT, Arizona - After strapping on knee-high snake guards and bowing his head to invoke God's protection, Oscar Andrade marched off into a remote desert at dawn on a recent Sunday to look for a Honduran migrant missing since late July.

The Tucson-based Pentecostal pastor bushwhacked for three hours in heat that rose above 38 Celsius, detouring around a mountain lion, two rattlesnakes and at least one scorpion, before taking a break to call the aunt of another missing man. Andrade believed he had found the young man's skull the previous day.

'Much strength, my dear sister,' Andrade told her. 'Sometimes we don't understand, but there is a reason that God allowed this.'

On the fourth search for that 25-year-old man from the Mexican state of Guerrero, the pastor and his Capellanes del Desierto (Desert Chaplains) rescue and recovery group had found his ID card in a wallet 12 meters from a skull and other bones, picked clean by animals and the relentless sun.

Oscar Andrade, who heads a group that provides recovery efforts for families of missing migrants, compares his photo of a worn shoe next to a human skull, top, with a photo of the same brand of shoe sent by a relative of a missing Mexican migrant, Sept. 6, 2022, in Tucson, Ariz.

Since March, Andrade has received more than 400 calls from families in Mexico and Central America whose relatives - sick, injured or exhausted - were left behind by smugglers in the borderlands.

Forensic experts estimate 80% of bodies in the desert are never found, identified or recovered. But those that are, added to casualties like 53 migrants trapped in an abandoned trailer in San Antonio, Texas, in June and nine migrants swept away in the Rio Grande this month, point to one of the deadliest seasons on record on the always dangerous Southwest border.

Fragile economies pummeled by the pandemic in Latin America, ruthless trafficking networks that control virtually all illegal crossings, and shifting U.S. asylum policies that affect migrants of different nationality and family status in drastically different ways all contribute to the toll - as does the Southwest's extreme heat.

Andrade, his group, and an Associated Press journalist accompanying them on the six-hour search quickly came across evidence of distress on this popular smuggling route - abandoned backpacks and half-full water jugs, several days' walk from the closest towns.

U.S. Border Patrol agent Jesus Vasavilbaso, aided by a Black Hawk helicopter, searches for a group of migrants evading capture in the desert brush at the base of the Baboquivari Mountains, Sept. 8, 2022, near Sasabe, Ariz.

'To be out in the desert is more difficult than to be in a church,' said the 44-year-old pastor and father of three teens. 'Our commitment is firstly with God, and with the families.'

The group didn't find the missing 45-year-old Honduran but planned to look again; it usually takes several trips to locate remains in this desert.

It's one of the deadliest corridors, according to aid groups and the U.S. Border Patrol, for migrants who, fearing being rejected under a pandemic provision called Title 42, try to evade authorities instead of turning themselves in right after crossing or applying for protection legally.

From staging camps guarded by cartel scouts in areas where the border has no fencing or bollard barriers, the migrants walk north for more than a week. They have to cross dozens of miles of desert mountains and dry washes before reaching major highways where smugglers' vehicles will take them to destinations across the United States.

Faith often motivates volunteer organizations providing aid along the border. The Capellanes, who search for the missing at least once a week, pray with the grieving families and don't charge them for the searches. They work closely with law enforcement, notifying the Border Patrol of every search and then local authorities if they find human remains, as they have nearly 50 times.

Even then, the migrant's body still has a long journey home. It takes time for authorities to retrieve the remains, which are then subject to forensic analysis to determine the cause of death and identification.

Apprehended migrants are processed by U.S. Border Patrol agents in the desert brush at the base of the Baboquivari Mountains, Sept. 8, 2022, near Sasabe, Ariz. The desert region located in the Tucson sector just north of Mexico is one of the deadliest stretches along the international border.

That puts 2022 on track to match the last two years, when cases were almost double those of years in the last decade recorded by the office. Along the entire U.S.-Mexican border, since last fall Customs and Border Protection agents stopped migrants for crossing the border illegally more than 1.8 million times, historically an extraordinarily high number. The agency recorded 557 Southwest border deaths the previous year, the highest since it began tracking them in 1998.

Given how quickly a body decomposes in the desert, unless it's found within a day, identification might require expensive DNA analysis, said Dr. Greg Hess, chief medical examiner for Pima County.

'The desert does a good job covering up crimes,' said Mirza Monterroso, director of the missing migrant program for the Colibri Center, a Tucson-based group that has recorded 4,000 missing migrants - 1,300 in Pima County alone - from reports from 14 countries and 43 U.S. states.

Unless there's a lucky break, like dental records, it might take up to a year to confirm if the remains Andrade found are indeed the young Mexican man's, Monterroso said.

His aunt, who asked the AP not to use their names because his parents haven't been told yet of Andrade's discovery, said she still hopes for a miracle. But otherwise, 'we fought to the end to recover what little is left.'

'My nephew's dream died at the border, but a person shouldn't end up like this,' she said. 'They left him in the desert because he had injured his feet.'

A 38-year-old father of two from Mexico City nearly died the same way last week after he developed debilitating foot blisters near the Baboquivari Peak, just 14 miles (23 kilometers) north of the border in Pima County.

Without food or water, he called 911 and was helped down the mountain by Daniel Bolin, an agent with the Border Patrol's search, trauma and rescue team who said this was his fifth rescue this year in the same spot.

Facing almost certain expulsion to Mexico, the man, who gave his name as Leonardo, said he came to the United States after losing his business during the pandemic.

Asked about his future, he murmured 'I don't know' and burst into sobs.